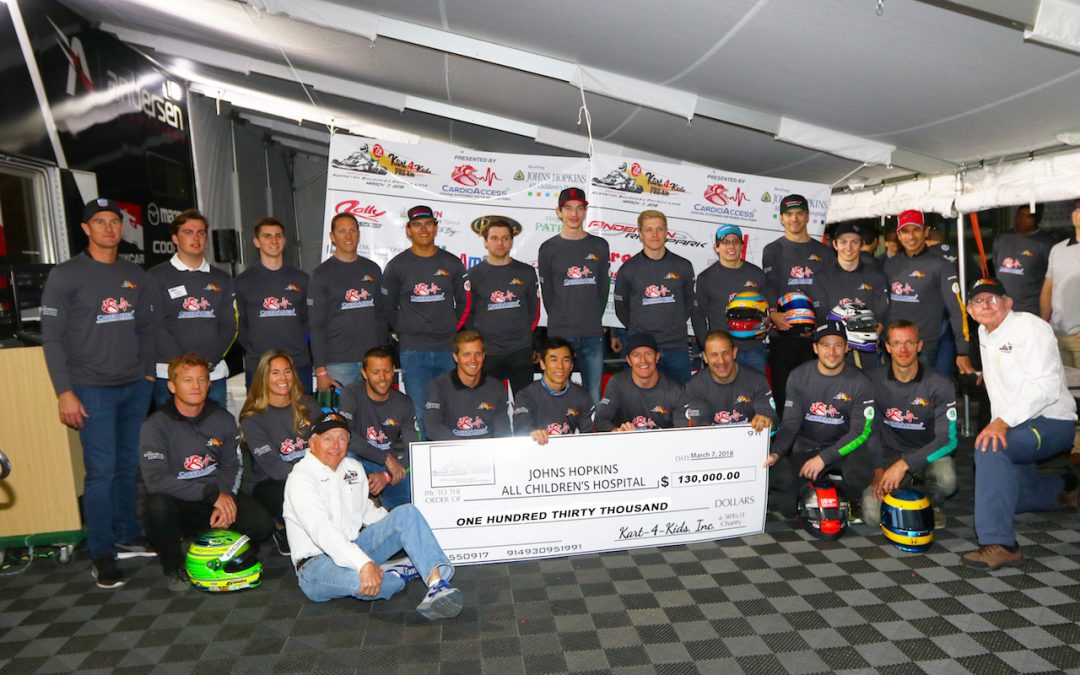 What happens when you put 22 professional race car drivers, who among them have 7 Indianapolis 500 wins, 10 IndyCar/Champ Car Championships, 3 LeMans, 10 Daytona 24, and 7 Sebring 12 Hour wins, and 22 Sports Car Championships, volunteer to race on 16 fully sponsored go-kart teams with over 70 amateur racers at a temporary track built at Turn 1 of the Firestone Grand Prix of St. Petersburg for a 11⁄2-hour Kart race? You raise $130,000 for Johns Hopkins All Children’s Hospital, that is what happens!

The 7th Annual Kart 4 Kids Pro-Am Kart Race to Bene t Johns Hopkins All Children’s Hospital hosted by Andersen RacePark, featuring Sebastien Bourdais and Patrick Long, blew through its stated 2018 goal of $100,000 with an over 60% in- crease from last year’s $81,000, and far greater than the entire last 4 years of the race.

This was a very interesting and exciting year, not only because of the money raised, but also in light of the fact that the race transitioned from the ready-made track at Andersen Race Park to a temporary track, which had to be built in one day, at Turn 1 of the Firestone Grand Prix Track in downtown St. Petersburg.

The move started when Bob Dikman, Sponsor Chair, stat- ed, “We should run the race in Downtown St. Pete.” To which Co-Chair Page Obenshain replied, “That will never happen.” That started an odyssey of meetings between Kart 4 Kids, An- dersen Race Park, and The Firestone Grand Prix of St. Pete to determine if, indeed, it could happen. Finally, on January 29, an agreement was signed allowing the race to move.

That was the good news. Now we had just 5 weeks to nish recruiting pro drivers and sponsors, organize the race

teams, and most importantly transform the open pavement in Turn 1 into a fully functioning Go-Kart race track complete with barriers, timing, pit lane, kart service, and auction and VIP dining areas. Not to mention guring out parking, access, and safety in the middle of Grand Prix move-in day and their nishing constructing the Grand Prix race course.

This truly monumental task could not have happened without the dedication and perseverance of Eddie Kisch
and Neil van Neikirk and their team at Andersen Race Park, plus the race committee and other volunteers. The following deserve special recognition for the incredible amount of time and effort they put in: Bob Dikman, Sponsors; Denise Remus, Registrar; Dave White, Program and Printing; Pamela and Terry Richard, Apparel, Goodie bags, and on-site Registration; Josh Brekeen, Logistics; Christal Smithyman, Signage; Chris Russick, Auction; Larry Mendez, Volunteers.

They were not alone, however as committee members; Jan Heylen, Jeff Holcombe, Will Reilly, Howard Jacobs, Lee Obenshain, Al Thomas, John Vita, Ethan Low, plus an army of volunteers all pitched in to make the dream a reality.

Any mention of the Kart 4 Kids Pro-Am would be incomplete without a huge thank you to Sebastien Bourdais and Patrick Long whose hands-on involvement has truly made all the rest possible.

Keep in mind that this all started in 2012 with the idea of honoring the memory of St. Pete resident Dan Wheldon by raising some money for the hospital he and his wife Susie sup- ported. Little did we know then, where it would lead.

A Down South BBQ Tour to Palm Harbor